"Laura always wondered why bread made of corn-meal was called johnny-cake. It wasn't cake."  - Little House in the Big Woods, Laura Ingalls Wilder

Shortly after beginning to read chapter books independently, my mother suggested I read the first of Laura Ingalls Wilder's Little House books, Little House in the Big Woods. It was the summer I turned seven and I tore through the series (with breaks in between some of the books to read various books in the Beverly Cleary and Judy Blume canons) with fervor until I finished the last book during Christmas vacation six months later. I have particularly fond memories of reading The Long Winter during an overnight stay at my grandfather's house. I always, always knew that I would read these books with my kids. One of my first thoughts upon learning my first child would be a boy--I am not kidding--was that there went my dreams of being able to bond over the Little House books. Then I heard--from teachers and other parents--that their boys loved these books. And my visions of reading them with my children were restored.

My boys and I began reading Laura Ingalls Wilder's "Little House" series last summer, when I thought they were both old enough to appreciate Little House in the Big Woods as a read aloud. They didn't just love it; they clamored for more. Good thing Laura Ingalls Wilder wrote eight more books in the series. (Though I tend to dismiss the last book, The First Four Years, on the grounds that it is disturbing and has a different tone from the rest of the series. A fact I picked up on even at the age of seven, though a recent New Yorker article shed some additional light onto this topic.)

We are now in the middle of On the Banks of Plum Creek, my favorite of the Little House books. To me, this book has more action and character development than Little House in the Big Woods and Little House on the Prairie (the first two titles we read), which are heavy on the long descriptive passages. It is in this book that the individual personalities of Laura and her sister Mary become more defined--Mary as the gentle, obedient daughter and Laura as the spitfire tomboy (my older son always gets upset when Laura does something wrong and gets scolded by Pa)--and we see them in the world around them instead of just at home. Who can forget that house in the ground, or mean Nellie Oleson and her town party, or the locusts, or--most disturbing to my seven-year old mind--Laura losing her beloved rag doll, Charlotte? Oh, there is action and plenty to love in the earlier books: the image of Laura and Mary playing with a pig's bladder balloon in Little House in the Big Woods is forever burned into my brain because it just seemed so weird to me the first time I read it. And my boys don't tire of hearing about Pa and his hunting escapades, or the way they built their homes, or the various animals the the Ingalls family kept as pets and working farm animals.

Food figures prominently in Wilder's descriptions of the (often harsh) pioneer life. So much so, in fact, that Barbara M. Walker collected many of the foods mentioned throughout the course of the series in The Little House Cookbook. It is in this book that we found the recipe for johnny-cake, a bread that was a staple in Laura's childhood home. Walker describes it as, "a crusty slab of cooked cornmeal that was mostly a vehicle for syrup or gravy." The name "johnny-cake" comes from New England pronunciation of "journey cake"--a staple of colonial travelers. 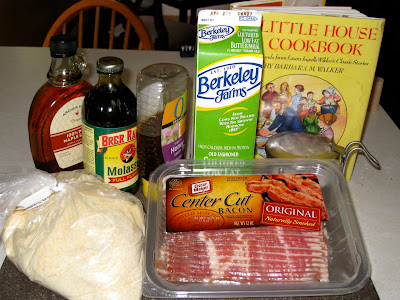 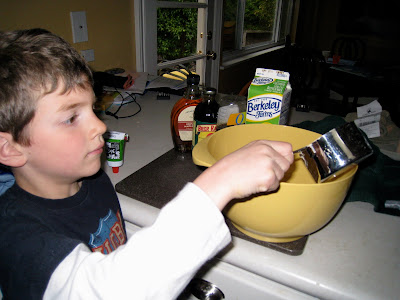 3. (Optional) Make drippings. Walker has a whole section devoted to drippings in her book. Drippings are the reserved fat from cooked bacon or salt pork. They were used for frying or in place of butter. We made our own drippings by cooking (several) strips of bacon in the iron skillet. (My husband manned the skillet while the boys and I prepped the dry ingredients, making it a true family affair.) If you don't eat pork for religious or health reasons, I imagine you would be able to use melted butter or shortening in place of the pork drippings. I wouldn't recommend substituting turkey bacon for pork bacon in this recipe; we normally buy turkey bacon but the low fat content makes it difficult to generate the amount of drippings needed for this recipe.
4. Pour drippings into the center of the dry ingredients.
5. Stir molasses into the boiling water and pour over the drippings. Stir until mixture becomes pasty.
6. Stir in buttermilk and mix well.
7. Pour the batter into baking pan and bake. Here is where my method diverged quite a bit from Walker's instructions. Rather than a baking pan, I poured the batter into the iron skillet and cooked it in that. The book says to bake for 20 -30 minutes, until the dough surface is cracked and the edges turn brown. We found that 20 minutes was the perfect amount of time. 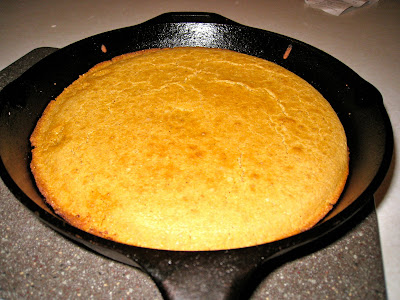 Walker recommends serving the johnny-cake with honey, molasses, baked beans or boiled cabbage and meat. I suppose that would have made for a more authentic meal but instead I made chili. (We added the crisp, crumbled bacon we used to make the drippings.) It was perfect for a cold, overcast spring evening. We of course followed this up with a chapter in On the Banks of Plum Creek.
As for the johnny-cake--it tasted like a bland, dry corn bread. We didn't serve it with syrup, honey or molasses since we dipped it in the chili but if eating it as a snack or with breakfast the extras would have helped to sweeten it.
In addition to the original Little House series and the cookbook, there are a number of spinoff books.   Summertime in the Big Woods is part of the My First Little House series of illustrated picture books--perfect for young children who are not yet ready for the longer originals. I tend to ignore most of the "new" Little House books but this series came highly recommended by friends.
And for grown Little House fans, this New Yorker article is a must-read. Among other things, it discusses how Laura Ingalls Wilder and her daughter, Rose Wilder Lane, collaborated to write the Little House books. I'll never read them in the same way again.
Posted by Katie Fries at 7:35 AM

Wonderful! I, too, grew up as a fan of the books and have enjoyed reading Big Woods to Maggie and Audrey. We'll read the next book in the series soon. Might just have to make some johnny cake one of these days, too.

Mmm. Johnny (journey) cake made in a cast iron Dutch oven and baked over a campfire is also good dipped in chili. Perfect of the chilly night in the woods.

Sonya @ Under the Desert Sky said...

Kate, do you think the "My First Little House" series would be good for a 4-year-old?

By the way, I think we might try this recipe next time we make chili. It would be fun for Livie to help!

Sonya, I do think the My First Little House series would be great for Livie, but I also think--if you and she are both up to it--that she would enjoy "Big Woods" as a read aloud. I initially started reading it for Matthew but Jonathan was just as interested. I usually read a chapter or two at a time.

My 4-year-old really enjoyed hearing Big Woods read aloud. It wasn't too much for her, a chapter at a time.