"They would feat on Who-pudding, and rare Who-roast-beast
Which was something the Grinch couldn't stand in the least!" - How the Grinch Stole Christmas, Dr. Seuss

That's right. I made a roast. I really had to ask myself: does the novelty of making something called "roast beast" make up for the fact that making it is an elaborate and time consuming affair? And the answer is yes. I make a roast like twice a year so I might as well make it now.

I hope everyone is familiar with Dr. Seuss' How the Grinch Stole Christmas

that airs on television every year around this time. It's a holiday classic. But if you need a refresher...

The Grinch is a surly kind of guy who hates Christmas and all of the happy citizens in Who-ville who love it. (Clearly, he is just lonely and misunderstood and only acts out to mask his pain.) While grousing about how much he hates the season he is struck with inspiration: he will prevent Christmas from coming! He puts his plan into action and soon is sneaking into each home on Christmas Eve to make off with all of the Christmas trappings. But something goes wrong. As the Grinch is congratulating himself on Christmas morning, he realizes he can hear singing coming from Who-ville. Despite his best efforts, he hasn't ruined Christmas at all. The Whos may not have presents or decorations but they have each other and the Grinch is stunned to realize spirit of Christmas comes from within. He begins to have second thoughts about what he has done. Filled with the Christmas spirit, his heart grows "three sizes" and he returns to town to return all of the things he has stolen. He even presides over Christmas dinner, where he carves the roast beast. Awwww.

Obviously, we had to make roast beast in honor of the Grinch. Knowing Dr. Seuss the roast beast is probably some sort of moose or mammoth or something (the picture leaves it open to interpretation) but for our purposes I decided it was beef.

Roast Beast (really Ina Garten's Company Pot Roast)
(I did not follow Ina's recipe to the letter. What follows is my interpretation of the original recipe.)

Additional equipment: French oven (sometimes called a Dutch oven), immersion blender (or food processor).
The first thing you should know is that this is a fairly elaborate undertaking. Be prepared to spend some time in the kitchen. The cook time alone is 2+ hours. Fortunately, once you have everything in the oven you can ignore it for awhile.
1. Preheat oven to 325*. While oven is heating chop your vegetables. I always chop mine and throw them in a large bowl, then set aside for later.
2. Season the beef with salt and pepper. Dredge in flour (making sure all sides are covered).
3. On the stovetop, heat 2 tablespoons of olive oil in the French oven. Sear meat on all sides, then remove and set aside.

4. Add 2 more tablespoons oil to the French oven. Add vegetables and garlic and cook until softened. 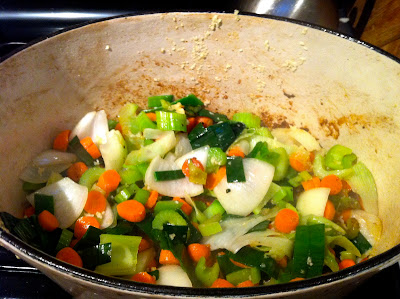 5. Add wine, brandy, tomatoes (with liquid), chicken stock, bouillon, rosemary, and thyme. Once boiling, place the meat in the French oven. Cover, remove from stovetop and place inside oven for about 2.5 hours, or until meat is fork tender. About an hour into the cook time turn heat down to 250*. 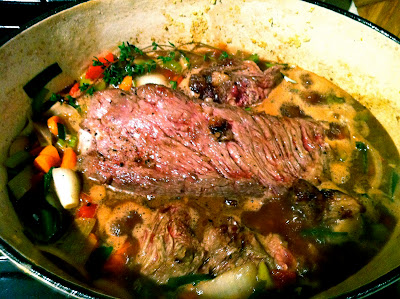 6. When meat is finished cooking, remove from oven. Place meat on a separate plate. Remove the herbs and discard. Remove about half of the liquid and veggies and place in a separate bowl. Puree using an immersion blender (or food processor) and return to French oven. Place on the stovetop and let simmer on low heat. While simmering, mix butter and 2 tablespoons of flour together and add to pot. Let sauce simmer until thickened.

7. Serve meat with sauce and veggies on top. I served toasted garlic parmesan bread alongside the meat. 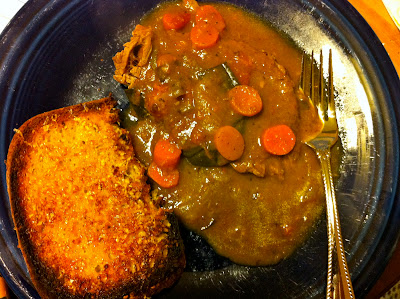 This meal takes a long time to cook but the results are well worth it. While it was in the oven my kids complained that they just wanted something else for dinner, but as the aroma permeated the house they began to get excited about the "roast beast". I think they set a new record for the number of times "roast beast" can be uttered in one evening. "The roast beast smells good."  "I can't wait to try the roast beast." Obviously, changing the name of an old dish somehow makes it taste better; I can't imagine they would have been so excited over plain old pot roast.

And really, this is much better than plain old pot roast. The addition of the wine and adding the puree at the end really classes it up and gives it a rich, velvety flavor. I don't think I can go back to making pot roast in my crock pot after having it this way. Even if it does require a little more effort.
Posted by Katie Fries at 12:15 PM