Since starting this blog I have been introduced to a number of wonderful kidlit blogs written by like-minded folks, and I've discovered lots of new reads through the recommendations of others. I became intrigued with author/illustrator David Lucas after reading reviews of Cake Girl

on Playing by the Book. After a quick Amazon search I discovered he'd also written a book called Nutmeg

--and the cover art, featuring a little girl and various cooking implements, tipped me off that it might be a good fit for my blog. I searched my library's online catalog, placed a hold and had the book in my hand a few days later. (Aren't libraries wonderful?)

Nutmeg is a young girl who lives with her uncle and cousin in a dilapidated house on what amounts to a beachfront property junkyard. We don't know how their living situation came to be or why they are stuck eating bland cardboard, string and sawdust (depicted as looking suspiciously like toast, spaghetti and rice) but it's immediately evident that Nutmeg is fed up with the status quo. One day she decides to go for a walk--she's not sure why but Lucas' illustrations deftly capture her frustration and yearning for something new (it would be interesting to pair this book with A Penguin Story, which I reviewed here). While on the beach she finds a bright bottle that, when opened, releases a genie. The genie grants her three wishes: Nutmeg wishes for something different for breakfast, something different for lunch and something different for dinner. The genie gives her a magic spoon and disappears. This sets off a chain of events that changes the lives of Nutmeg and her small family.

When she returns home, the spoon whips up a fabulous, colorful dinner--the best meal Nutmeg and her uncle and cousin have ever eaten. Later that night, though, the spoon stirs up the entire house and creates quite the ruckus. It stirs up the land and sea and stars and transforms the house into a boat. Which Nutmeg and her family sail to a new land, where a new breakfast awaits. After breakfast they return to their boat, presumably in search of more new and different places and foods.

Nutmeg contains elements found in so many great magical stories, including Aladdin, Alice in Wonderland and The Wizard of Oz. The shift from the drab, dull colors in the book's opening pages to a brighter palette when Nutmeg meets the genie especially recall the film version of The Wizard of Oz. The shift in colors illustrates her culinary awakening. There is more out there than the same old stuff she's been given every day, and it's good. Like Edna in A Penguin Story, Nutmeg's realization that there is more out there inspires her to sail on, looking for the new and different.

Instead of making the delicious foods Nutmeg and her family tried after the arrival of the magic spoon, we decided to make "string and sawdust" (yes, to be eaten at one meal instead of separately at lunch and dinner). It was easy to figure out what to do for the string (spaghetti). But what to do about the sawdust... I thought about rice (too many carbs; you can't have a meal of just rice and noodles) and then got to thinking about what sawdust looks like...kind of like pencil shavings. What is a food that goes well with pasta that you can "shave"?

Parmesan cheese. When grated with a fine, sharp grater, it looks like a pile of sawdust. I knew I was onto something when I told my six-year old my idea and he excitedly pointed to the picture and exclaimed, "Yes! That looks exactly like parmesan cheese!"

String and Sawdust (Spaghetti with Parmesan and browned butter) 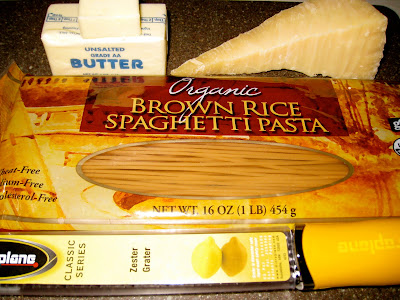 
Additional equipment: Cheese grater. Preferably a Microplane zester/grater. This is one of my most indespensable kitchen tools. It is absolutely essential for grating hard cheeses or garlic, zesting citrus, grating chocolate...I would be lost without this little tool. I am actually on my second one because my original disappeared sometime after Thanksgiving.
This recipe was inspired by a dish served at The Old Spaghetti Factory, a restaurant chain with locations throughout the United States (mostly West Coast). One of their most popular dishes is spaghetti with mizithra cheese and browned butter. Mizithra is a hard cheese and can be difficult to find. Fortunately Parmesan is similar in taste and texture and works just fine for this recipe.
Given its high butter and cheese content, this is not an "every day" or even a "once in awhile" meal. At least not in our house. It is more palatable than boxed macaroni and cheese (which I have always, even as a child, found particularly vile) though so if you prefer you can think of it that way.
1. Cook pasta according to package instructions.
2. While pasta is cooking, grate the cheese. This was a task I happily handed off to the boys so I could get the butter started. 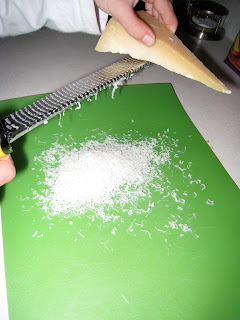 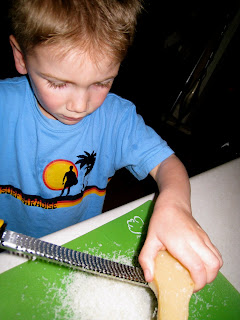 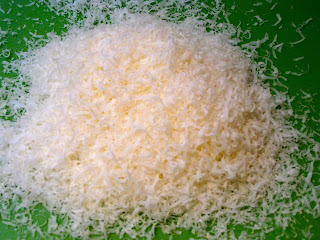 3. In a small saucepan, brown the butter over medium heat. Be careful not to scald it. It will start to bubble like this: 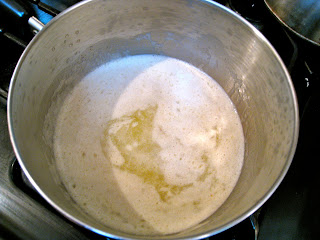 Stir the butter continually during this time. After about five minutes it will begin to turn a more golden/caramel color and you'll begin to see sediment accumulate in the bottom of the pan. At this point, cook just a little longer, until it gives of a caramelized, burnt butter (but not burned) aroma.

4. Serve the pasta with one or two spoonfuls of butter (we ended up with a lot of leftover butter) and some cheese on top: 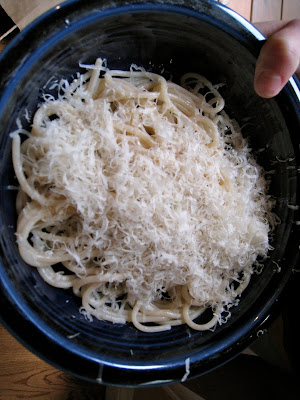 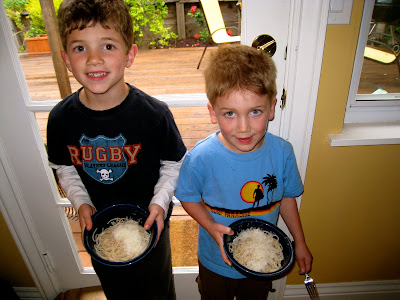 This meal was an all around winner. (I made the boys each eat a carrot to go with their bowls of pasta.) It is quite possibly my favorite thing I've made for this blog to date. Far more delicious, I am sure, than the string and sawdust Nutmeg ate. My kids certainly didn't complain about it. We have made this at home in the past but renaming it "string and sawdust" has made it an instant new favorite in the eyes of my kids and I know that in the future they'll request it by the new name.
Posted by Katie Fries at 7:55 PM

I love it! What a great meal :-) Food with funny names nearly always goes down well doesn't it? We have two family favourites - woodlice (baked potatoes, but when you put them in the oven you slice them in half and then each half you cut almost all the way through into thin slices, creating a comb like effect - the result when they are baked looks a little like woodlice!) and radioactive grass with ants (a carrot and mustard seed salad).
As to Nutmeg, as a book I personally was disappointed - I think it's Lucas' least successful book by far. He has a kernel of a good idea but doesn't actually quite pull it off for me. Halibut Jackson is probably our no. 1 by him, but Whale, and The Bluebird and the Robot are lovely too (the latter might make you cry - it did me!), followed by Cake Girl. He's written a fairy story for older kids called The Lying Carpet which I really enjoyed, but isn't extensively illustrated, which I think is a shame. Peanut again as great illustrations but the story didn't quite grab me. Anyway, now I'm off to order A penguin story through the library :-) Can't wait!

My kids loved The Robot and the Bluebird--they much preferred it over Nutmeg and I did as well. (But then, I am a sucker for robots, especially robots with hearts. See: Wall-E and the Tin Man.) I will have to reserve Halibut Jackson from the library!