"UNLESS someone like you
cares a whole awful lot,
nothing is going to get better.
It's not," - The Lorax, Dr. Seuss

So. It's Banned Books Week and we're talking banned and challenged books. I thought long and hard about which book I wanted to feature this week. At first I had another title chosen but it was a book that my kids don't particularly enjoy. They really, really like Dr. Seuss' The Lorax

, though, and guess what--this book was once banned. Really? Dr. Seuss? What about this book, with its peaceful message of environmentalism and sustainability (perhaps more relevant now than when it was published in 1971) could be cause for concern?

Uh, apparently that very message. Way back in 1989 some parents in the Laytonville (CA) Unified School District decided the book "criminalized the forestry industry" and had an "anti-logging message"; they attempted to get it removed from the elementary school's reading list. While their attempt to ban the book was unsuccessful, it goes to show that people can and will get upset about anything. We're used to hearing about books that are challenged due to profanity or their depictions of violence, sexuality, race or class relations. . . you get the idea. But attempting to ban a gentle children's story about the importance of respecting our environment? Now, Laytonville does happen to be a logging town (I'm highly amused by the idea of a bunch of burly loggers getting all up in arms over a Dr. Seuss book) so I can understand the concern but does that warrant restricting access to a book? Shouldn't kids--especially kids growing up in this industry--be exposed to the very real consequences of deforestation? Even if you didn't know that I send my son to the hippy dippiest kindergarten you can imagine (you do now!), the fact that I am writing a post speaking out against the censorship of books should tell you my thoughts on the subject.

As far as the story itself goes, The Lorax is a cautionary tale told by the Once-ler, a character who once found fame and fortune by chopping down Truffula Trees and making Thneeds from their tufts. There is such a demand for Thneeds that he brings in more workers, and machines, and builds factories. All the while he must deal with The Lorax, a nuisance of a guy who "speak[s] for the trees" and keeps popping up to tell him that cutting down the trees is wrong and that he's slowly poisoning the area. There is no more Truffula Fruit to feed the Bar-ba-loots and the polluted waters can't sustain the Humming-Fish population. Eventually, the Once-ler relates, there is no life left where the Truffula Trees once grew abundant. The last tree has been felled and the native wildlife has been driven away. As has The Lorax. The pictures, once vibrant oranges, purples, greens and pinks take on a grayish, nightmarish tone. The only hope, the Once-ler cautions, is for you (the reader) to care "a whole awful lot." Then, when the trees are replanted and life returns, The Lorax might come back.

As I type this I can't help but wonder if Wall-E was at least partially inspired by The Lorax.

The Lorax is a subtly powerful book and a wonderful way to introduce kids to the concepts of environmentalism and green living. Even though, admittedly, my kids weren't interested in pursuing that line of conversation right after we finished reading. Maybe it's enough that they're slowly absorbing the message each time we read it, and they don't even know it.

When I am choosing books and recipes to feature here I don't always have a plan. Sometimes I get the idea for a recipe as we're reading the book. Other times I choose a book and craft a recipe to fit the book. Or I choose a recipe and find a book that works. This time I chose the book well before I had any food ideas. I was struck with inspiration as I meandered through my local produce market and came face to face with a display of colored cauliflower. Is it just me or do the green, purple and orange crucifers look particularly Seussian? They became the inspiration for today's snack: 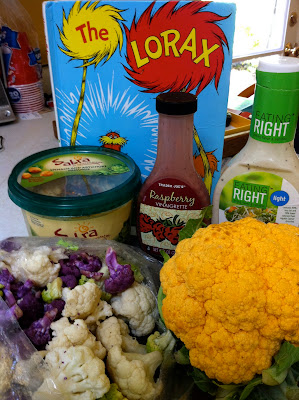 1. My plan, initially, was to simply serve the cauliflower alongside the dipping sauces and let the boys go to town. However, they were very insistent that we make the actual trees. My older son was the one to come up with a suggestion as to how we could make them: "Use celery!" We tried to attach the cauliflower to celery stalks using peanut butter as glue but the celery really couldn't support the weight of the cauliflower and the peanut butter was not the most effective glue so we settled for a pretty picture of what the trees would have looked like: 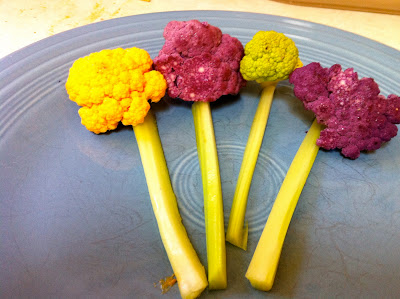 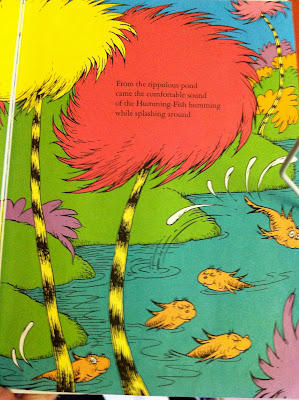 2. What I actually ended up doing was putting the celery and cauliflower in a bowl and preparing small cups of our dipping "sauces." 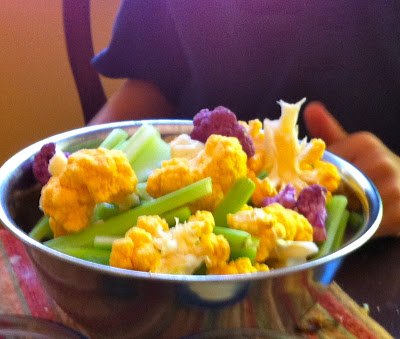 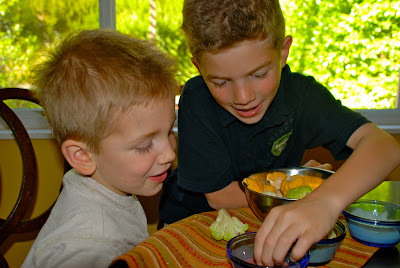 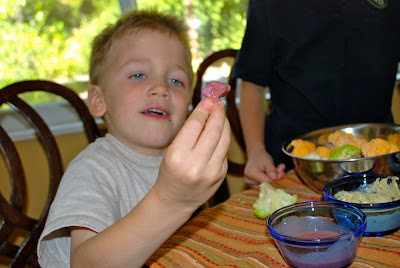 I do realize it's a little ironic that this book is about conservation and I've chosen to prepare a snack that is supposed to represent the very trees that were being cut down. Personally, I consider it a victory that I got my children excited about eating vegetables as an after school snack.
This book is part of a Banned Books Week roundup hosted by Nikki of Are you there youth? It's me Nikki. Check out her blog on October 2 for links to other Banned Books Week posts from around the blogosphere. Her Banned Books Week review of the Harry Potter series can be found here.
Posted by Katie Fries at 3:48 PM

I can't believe The Lorax was almost banned! It's one of my favorite books. Love the cauliflower trees- they look just like truffula trees.