"After the war Bob and Joe's colors made them rich. Day-Glo began to brighten everyday life back home. The colors made their way onto gas station signs and detergent boxes, traffic cones and magazine covers--including Joe's old favorite, Popular Science." - The Day-Glo Brothers, Chris Barton

I owe a debt of gratitude to authors like Chris Barton, who write cool non-fiction picture books. It makes my job as mom to two curious boys that much easier when I can answer their questions by picking a book off a shelf. Oh, I have my specialties, but when my boys' lines of questioning turn to how things work I turn to a book.

, with its true story of how brothers Bob and Joe Switzer invented Day-Glo colors, would appeal to my boys' inquisitive natures. My kids frequently scour our libraries' shelves for books about outer space, bridges and automobiles (a current favorite is Car Science

)--so I knew The Day-Glo Brothers wouldn't be a hard sell. And as soon as they saw Tony Persiani's cool, Day-Glo infused illustrations they were hooked.

Author Barton drew on primary sources to write this biography of how two brothers invented something that most of us take for granted. It's strange for me, a child of the 80s and 90s, to think that there was a time when Day-Glo colors didn't exist. However, until the Switzer brothers began experimenting with fluorescence to enhance Joe's magic acts, nobody had ever developed glow-in-the dark paints--never mind paint that glowed in the daylight. Tony Persiani's illustrations literally (and gradually) light up the pages so readers know exactly what is meant by the term Day-Glo.

We read this book at the perfect time, just before a trip to Disneyland, so the boys were able to put their newfound knowledge of fluorescence and Day-Glo to use and point out rides and attractions that used fluorescent paint. (Like The Many Adventures of Winnie the Pooh, below. Not the greatest picture because we were in motion but you can see how fluorescent paint is used to great effect.) 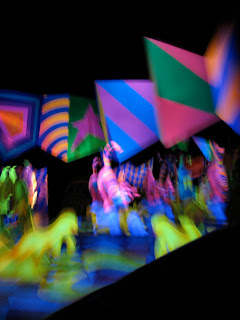 Here is another of my favorite examples of Day-Glo in popular culture--the Beatles' Sgt. Pepper costumes: 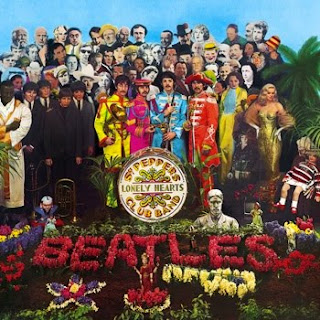 I started thinking about ways we could continue to explore fluorescence and Day-Glo by bringing it into the kitchen.

Turns out there aren't a whole lot of options because Day-Glo paint isn't exactly food safe. There are some spices that seem to emit a natural fluorescence (turmeric). And I was able to find some neon food coloring. The question was, what can we do with this? I considered and rejected the idea of making neon star cookies. The Switzer brothers created Day-Glo paint. Why not paint something?

Which is how we ended up decorating a couple of cakes by painting on neon cream cheese frosting. 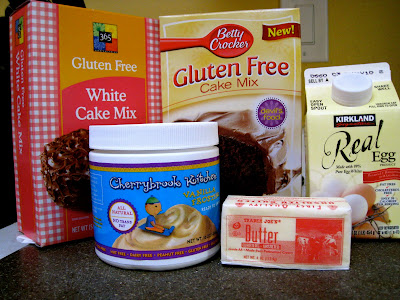 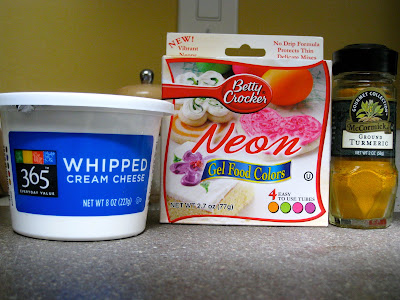 1. Bake cakes according to package directions. I wanted round cakes and I needed two, one for each kid. One thing to remember, when working with gluten-free cake mixes, is that one box yields only one round layer. A regular boxed cake mix should yield two round layers.
2. Let cakes cool completely before frosting. I initially bought the Cherrybrook Kitchen vanilla frosting shown in the picture. I ended up not using it because, while it tasted great, it was more of a glaze and never completely dried. I had to scrape it off and start over with homemade buttercream. You need a dry, hard surface if you want to "paint" on it. For this reason, I also don't recommend using Cool Whip or whipped cream as frosting.
3. Let the frosted cake(s) "set" overnight. The frosting needs to be dry before you attempt to paint on it.
4. When you're ready to decorate your cakes, mix your paints. My friend Ashley, who makes gorgeous cakes, suggested I use cream cheese as my paint. I scooped small amounts of cream cheese into a divided tray and added a squirt of the Betty Crocker gel coloring to each. The Betty Crocker neon gel comes in four colors: pink, orange, green and purple. I used the end of a paintbrush to blend the gel with the cream cheese. I also decided to make yellow by combining turmeric and cream cheese. If you do this, remember that turmeric does have a taste. A taste that perhaps does not belong on a cake. It's your call. 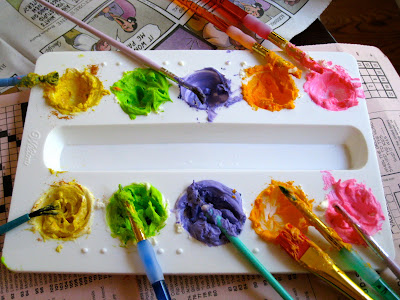 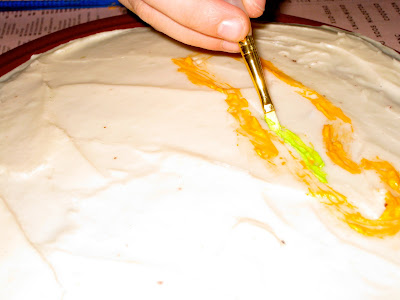 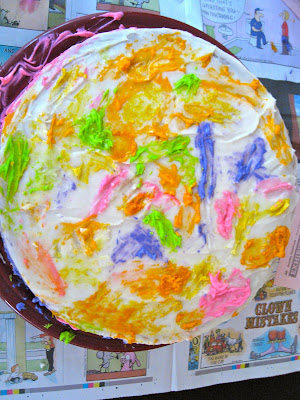 My six year old painted a car in a garage at sunset: 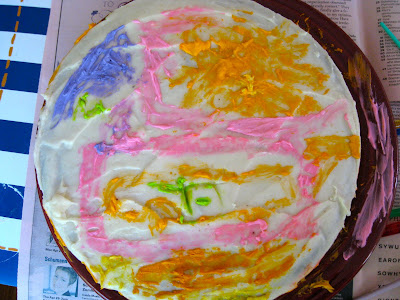 If you have an ultraviolet light (ours happens to be a Crayola Glow Station pen), shine it on the cakes in a darkened room and see what happens: 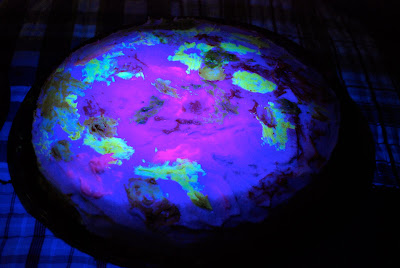 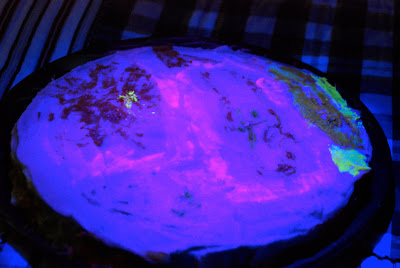 The turmeric ended up giving off the most fluorescence but the pink (and to some extent, orange) ended up looking nice as well. It goes without saying that the boys enjoyed eating their creations as much as they enjoyed painting them.

For a good explanation of how regular and daylight (Day-Glo) fluorescence work, check out the cool animated video at Charlesbridge Publishing, publisher of The Day-Glo Brothers.

DayGlo Color Corp., the company founded by the Switzer brothers, has a website and an online store that may be of interest to those who are interested in products manufactured by the company. (My personal favorite Day-Glo color is Rocket Red.)
Posted by Katie Fries at 7:47 AM

How neat! Want to know something else cool that I "discovered" about six months ago: edible food color markers!

I ADORE this - I'm so glad you submitted it to the carnival of children's literature so that I could find you! I have lots of turmeric in my spice cupboard so I don't think it will be too long before we're trying this out!

Thank you! Your blog is wonderful; do you mind if I link to it?

I've linked back to this post today (http://www.playingbythebook.net/2010/06/14/glowing-in-the-dark/) but I didn't have as much luck with turmeric :=( Tonic water worked great though.... Thanks so much for the original inspiration!