With Halloween around the corner, you may have stocked up on canned pumpkin to make pumpkin fudge...or pumpkin pies...or pumpkin scones (you get the idea). What to do when you have half a can of pumpkin left? You can do what we do and whip up a quick and easy snack: pumpkin yogurt.

I started making pumpkin yogurt when my kids were very young. Back then, I could easily trick them into thinking pumpkin was a delicious snack. I don't know why, but one day I mixed some pumpkin with some plain yogurt and a new treat was born. My kids still enjoy it but it's not something I make all the time. I tend to save it for the fall, when canned pumpkin is easy to find in the grocery stores. 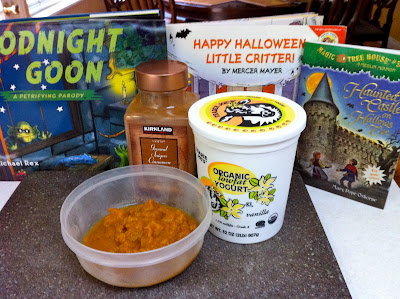 Ingredients:
This is so easy I don't know why I am bothering with directions, but here we go...
1. Combine equal parts pumpkin and yogurt. Stir together.
2. Sprinkle with cinnamon. 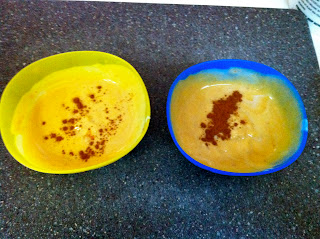 It's that easy. I like that it's both a taste of fall and a way to serve a fruit that we don't often eat.
With Halloween in just a few days, we've been making pumpkin yogurt and enjoying our stash of Halloween books. I am really not sure how we ended up with so many Halloween books, but over the years we've acquired quite the collection. Some of the ones my kids particularly enjoy:
Goodnight Goon

As evidenced by the title, Goodnight Goon is a parody of the classic Goodnight Moon. One of my sons received this as a birthday gift last year. We get a kick out of it, especially the various monsters that wreak havoc in the little werewolf's room.

This is really a sentimental favorite in our house. After my second son was born, my husband took my older son (then two) to the bookstore to pick out a new book. This is the book he chose. It is a simple story about Little Critter greeting his costumed friends on Halloween. Flaps that open to reveal the friends underneath their costumes made this a hit with my kids when they were younger.

My older son has recently started reading the Magic Treehouse books out loud for his nightly reading homework. This one follows the typical storyline of siblings Jack and Annie on a magic mission for Merlin but the haunted castle at the heart of the story's mission gives this one a Halloween flair. We picked this one up at my son's school book fair last week.

I have a full review of this book here but it is definitely a Halloween favorite around here. All of the action happens at a Halloween costume party.

Dick and Jane and Vampires

Um, okay. So I kind of think the whole vampire thing is a bit played out. I will admit right here that I am a huge Buffy the Vampire Slayer fan but I really did not gravitate toward Twilight (I tried and couldn't get through the first book) and the others that have followed. However, I saw this book in the bookstore and I couldn't resist buying it for my prereader for his birthday. The juxtaposition of these kids from yesteryear (maybe it's because I've been watching a lot of Mad Men and have been on a retro kick) with vampires just makes it so random and hilarious. I mean, there are pages with Vampire lurking behind bushes and under beds and it sounds vaguely sinister but it is really really funny. Over the course of several very simple chapters (like the original Dick and Jane books, this is an early reader meant for kids who are beginning to read aloud) Vampire reveals himself to be a nice guy who jumps rope with Dick and Jane and wears bonnets Mother makes for him. And, in the end, he finds a very special soulmate when Dick and Jane introduce him to a lady vampire. And everyone is happy happy.  Awwww.

What are your favorite Halloween books?
Posted by Katie Fries at 4:28 PM 3 comments:

"Then she went to the kitchen . . . and put them all in the washing machine." - Ghosts in the House!, Kazuno Kohara


Halloween is just around the corner. There's a chill in the air, Halloween costumes are being planned and seasonal decorations are beginning to adorn everything from my kids' classrooms to Disneyland (we were there last week). Okay, so here in the Bay Area the first part of that statement doesn't hold true (it was 94 degrees today!) but that hasn't stopped my thoughts from turning to Halloween. And so, naturally, it's time to feature some seasonally appropriate books and recipes on this blog.

Last week when we were in Disneyland we ran across some very cute chocolate covered marshmallows in the candy shops. My younger son and I are fans of their marshmallows anyway (they're gluten-free!) but he was especially taken with these, as they were covered in white chocolate and decorated to look like ghosts: 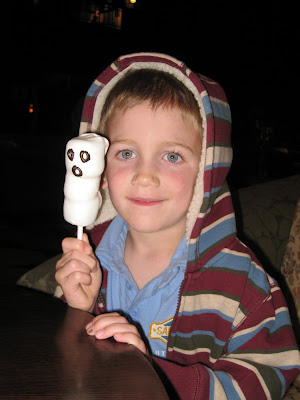 We really liked them (he chose it for his treat two days in a row) and I thought it would be fun to recreate them at home. 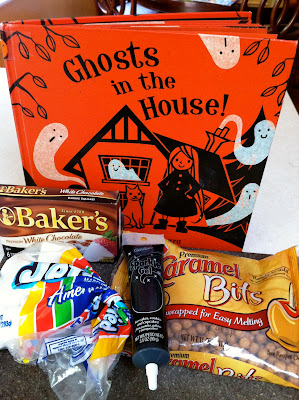 
1. Place three or four marshmallows on the end of a stick. Make sure you don't poke the stick all the way through the top marshmallow.

2. Melt your caramels--along with 2 tablespoons of milk--in a double boiler. (The milk will prevent the caramel from taking on the consistency of cement once it cools.) Stir together until melted. 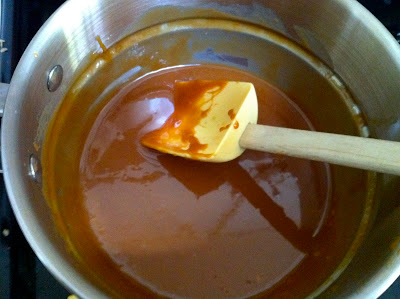 3. Working quickly, dip your marshmallows in the caramel. I found I was able to get the best coverage by using  the spatula to drizzle the caramel over the marshmallows. 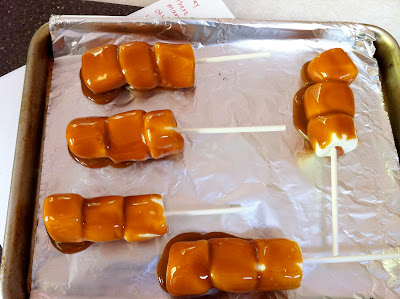 4. Place caramel covered marshmallow pops on a baking sheet lined with NON-STICK foil. Put in the fridge to cool.

5. (I took my caramel covered marshmallows out of the fridge after about an hour.) Melt the white chocolate. The instructions on my box of Baker's Chocolate said to use the microwave but I found that the double boiler worked fine. Be very careful not to overheat the white chocolate or it will harden and smell weird. Not that I would know anything about that...

7. Return candy to the fridge.

8. Before serving, pipe on faces using chocolate or edible gel. It's easy to find black tubes of edible gel during this time of year. (Though the faces on the Disneyland ones were made from piped on chocolate.)


Wondering which book to pair these cute ghost marshmallow pops with? There is an abundance of Halloween/ghost themed kidlit available at this time of year, but my current favorite ghost book is Kazuno Kohara's Ghosts in the House! (originally published as The Haunted House in the UK).

Ghosts in the House! is a cute story about a little girl who moves into a haunted house. Fortunately, the little girl happens to be a witch so she knows exactly how to handle those ghosts! First she traps them, then she washes them, then she finds new household uses for them. Ghosts become curtains, table cloths and sheets. It's a sweet, not-scary Halloween story that is perfect for young preschoolers but the pictures are interesting enough for older children to enjoy. I love them so much! The pages are orange with only two colors--black and white--used in the illustrations. The white ghosts are nearly transparent; a very cool effect. It almost looks as through they're done in chalk or sponge paint. I really enjoy books that incorporate unusual or unexpected design techniques, and the orange pages really work for this story. 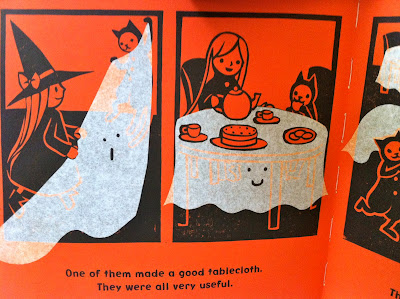 Coincidentally, the very day I chose to blog about this book was the day my younger son happened to bring a picture of a haunted house home from school. The house is made out of orange construction paper and his ghosts are drawn with . . . chalk! This would be a fun and easy project to do at home after reading this book. It makes a great Halloween decoration. 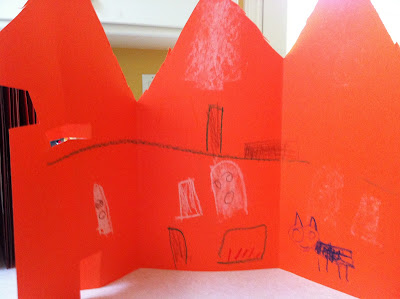