It's August and friends of mine in other areas of the country have been enjoying blueberry picking. I know this because I see their status updates and pictures on Facebook. While my family did recently enjoy picking strawberries and blackberries, we unfortunately don't live in an area that is very conducive to blueberry growth. We have to buy ours at the store. Even so, with blueberry season in full swing we're able to find inexpensive fresh berries in our local stores.
There's only one book I can think of to pair with  blueberry picking (or eating, as the case may be): Robert McCloskey's 1948 classic Caldecott Honor winner, Blueberries for Sal

. It is the story of Sal and her mother and the day they spend picking berries to can for the winter (I had to explain canning to my kids). Like many small children, Sal is more interested in wandering and eating the berries rather than paying attention to her mother. This is how she inadvertently ends up following a mama bear--whose own distracted cub has been following Sal's mother. In the end everyone gets sorted out and Sal and her mother return home with their blueberries, nobody worse for the wear. (The lovely endpapers, which show Sal and her mother canning their harvest, are a nice touch.)
My kids laughed out loud when Sal took more interest in eating the berries than in following her mother, and again when the mother bear realized she was being followed by a human child rather than her own cub. My favorite part of the book? The pen and ink illustrations, which are blue and white rather than the traditional black and white. Love that blue! It's simple and effective and, well, just pretty.
If you are looking for ways to use up some blueberries this summer, I've got just the recipe for you! This is one of our family favorites and my husband shares equal credit for creating it. I may have made the first batch of frozen yogurt in our ice cream maker

years ago but he is the one who perfected and embellished it until it became...
Blueberry Frozen Yogurt with Blueberry Truffles 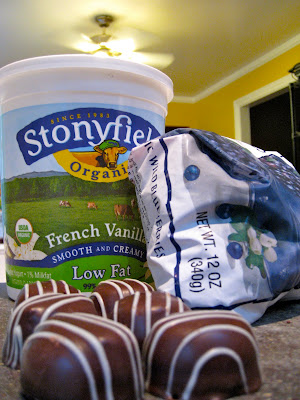 Ingredients
Additional equipment: Electric ice cream maker. If you don't have one, you can make the recipe as directed and stick in the freezer for a little while to give it a "frozen" consistency.
Note on the truffles: The first several times we made this frozen yogurt we used chocolate chips. At some point we decided to chop up some See's blueberry truffles we had on hand and throw those in instead. It has become our preferred way to make this yogurt but don't worry if you don't have truffles (since See's is mostly a regional California thing)! They do give it an extra blueberry kick but it is just as good with chocolate chips.
1. Pour yogurt into a mixing bowl. I usually use 1/2 to 3/4 of the container.
2. Chop truffles into small pieces and add to yogurt. If you're using chocolate chips you can chop them finely (my husband's way) or dump them in whole (my way--I am lazy and afraid of chopping off a finger...and I also like the large chunks of chocolate in my yogurt). 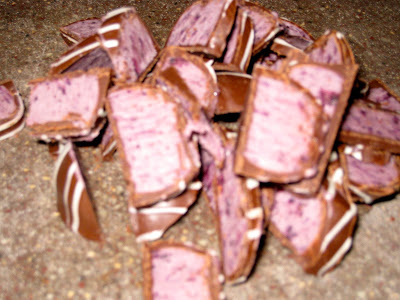 3. Add blueberries
4. Stir yogurt, blueberries and chocolate together. Pour into ice cream maker. Add a small splash of milk. Let churn for a half hour, or until the yogurt has the right consistency. 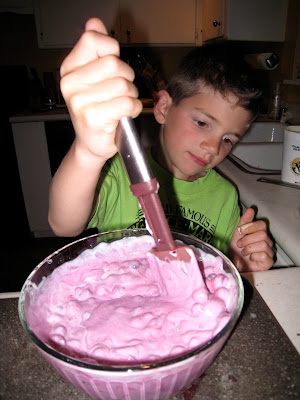 Here's video of what it looks like when first put in the machine:

This video was taken about ten minutes in:

About 25 minutes after the yogurt went into the machine. Ready to eat. 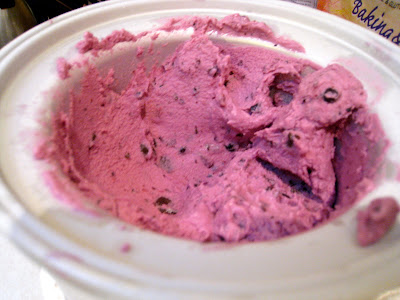 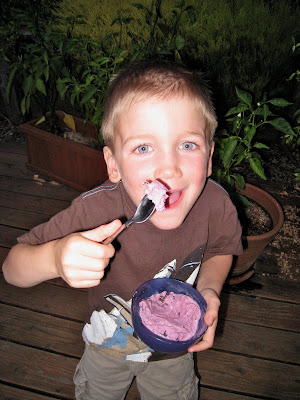 This recipe is easily adapted--we've made peach frozen yogurt and we've also made our own vanilla using plain Greek-style yogurt and adding sugar and vanilla. If you're trying to cut back on sugar or prefer your yogurt with more of a "bite" try making this recipe with plain yogurt instead of vanilla flavored yogurt.  However you choose to make it, it's an easy and tasty dessert.

*Disclosure: As an Amazon affiliate, I earn a small percentage of the purchase price of items purchased through the Amazon.com links on this site. Thank you for helping to support Eat Their Words!
Posted by Katie Fries at 8:40 PM

We have that lovely book 'Blueberries for Sal' too. Nice lesson plan. I'll print it and put it in our book. Thank you.

What an inspired idea: yogurt and See's Blueberry Truffles. I'm putting a stop at See's on my errand list for later today.

YUM! Plus, I love that book!