One of the activities my two boys (ages 5 and 7) and their 2 year old cousin all love to do together is play with the play kitchen at my parents' house. There's just something about pretending to cook that appeals to kids. For a long time, before we had our own play kitchen set up in our home, it was one of the things my kids were most drawn to at children's museums and friends' houses. Come to think of it, my sister and I are four years apart and rarely played together growing up but my sister's Little Tikes kitchen was one thing that we both enjoyed.


Carolyn Parkhurst's Cooking with Henry and Elliebelly (illustrated by Dan Yaccarino) perfectly captures young childrens' fascination with cooking and creating. We are introduced to siblings Henry and Elliebelly via their cooking "show". Henry, the older sibling, has his own vision of how their show should proceed. As Henry tries to instruct his "viewers" in the finer points of making raspberry-peanut butter-marshmallow waffles, the toddler Elliebelly wreaks havoc and frustrates Henry with her very toddlerlike demands. First she insists she be allowed to help. Then she orders Henry to wear a pirate hat. Frustrated but undeterred, Henry gamely works around his dervish of a sister until their play is interrupted by their (offstage) mother's offer of real waffles.

One of the things I love most about this book is that the author clearly gets how kids play, and how easily older siblings become frustrated with their younger siblings. Reading the interactions between Henry and Elliebelly is a lot like listening in on my own kids as they play in one room while I'm in another. It was a nice touch to have their mother's offstage responses to their bickering presented in quote bubbles. Henry and his little sister are a bit younger than my own kids but their personalities are remarkably similar. It's not a stretch to accept that Elliebelly insists Henry wear a pirate hat while they do their "show" because I have a son who likes to wear a Batman cape while doing just about anything.

We decided to make Henry's raspberry-peanut butter-marshmallow waffles, with one caveat: we didn't follow Henry's recipe. His recipe calls for "Seventeen cups of imported flour from Kansas," and duck eggs. And that is before Elliebelly decides to add pizza and "Baby Anne" to the mix. Yeah. I think we'll stick with a more traditional approach. If you can even call raspberry-peanut butter-marshmallow waffles traditional. We whipped these up for an after school snack. 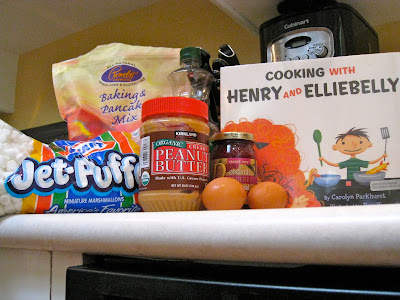 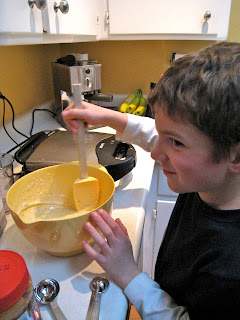 2. Stir 2 tablespoons peanut butter into batter.
3. Fold in 1 or 2 handfuls of marshmallows. 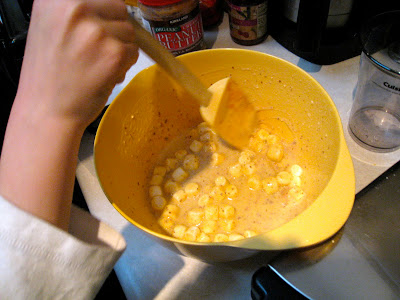 4. Pour batter into heated waffle iron. This was exactly enough for 4 waffles. 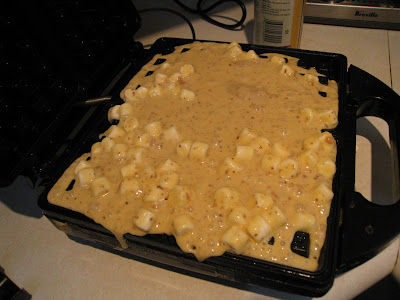 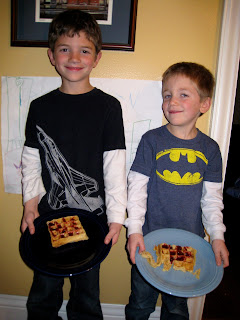 These were easy to throw together and made for a sweet snack. They had a light peanut buttery taste and the raspberry spread was a nice complement. Watch, my kids will probably ask me to make these all the time now.
* As an Amazon affiliate I receive a small commission when items are purchased via links on this blog. Thank you for supporting Eat Their Words!
Posted by Katie Fries at 4:46 PM

Hi there--I'm the author of COOKING WITH H AND E, and I just came across this. I love it that you came up with an actual recipe for the waffles! Thanks so much for posting this!

Great children. :) Thanks for the recipe anyway...