Cora Cooks Pancit was a serendipitious discovery, for a number of reasons. I was shown the book on a recent visit to Fresno, my hometown in the Central Valley of California. I knew immediately (sometimes you can judge a book by its cover) that it was a perfect fit for my blog. Further research led me to discover that the author, Dorina K. Lazo Gilmore, makes her home in Fresno. And she was born and raised in Chicago, where my husband and I lived for eight years. And her publisher, Shen's Books, is based in my current hometown. If that isn't serendipitous, I don't know what is.

The book alone would have made me want to feature it on my blog. But the local connection was icing on the cake. I like to support hometown authors. (One might not think of the Fresno as being a hotbed of literary activity, but a number of notable authors and poets--including William Saroyan, Gary Soto and Philip Levine--have called it home. And I like to promote that because the main thing Fresno seems to be known for is, uh, crime.). I also like to support independent publishers (once upon a time, I worked for an independent publisher). I am thrilled that I have an opportunity to review a book that I have a personal connection to, even if that connection only extends to the Fresno connection the author and I share.

In Cora Cooks Pancit, Gilmore's title character is the youngest of five children. She's used to being given the "kid" jobs in the kitchen while her older sisters and brother get the more involved tasks. But one day, when all of her siblings are off doing other things, Cora asks her mother to teach her to cook pancit, a traditional Filipino dish their family enjoys. Cora's mother teaches her to make pancit according to her grandfather's recipe. She helps soak the noodles and shred the chicken while Mama chops the vegetables. As in Tallulah in the Kitchen, we get a few reminders of basic kitchen safety within the narrrative--wash your hands, be careful near the stove. There are a few mishaps along the way but Mama reassures Cora that it's okay. When dinner is served Cora's siblings are surprised and impressed that Cora has helped cook such a grown up meal. Everybody loves it, and Cora is overjoyed at her accomplishment. The final illustration, of Cora wearing her mother's red apron and basking in the praise of her family, says it all.

Kristi Valiant's illustrations perfectly complement Gilmore's story. Although we never know exactly how old Cora is, her true-to-life expressions brought to mind my own four year old. The final illustration, of Cora's family enjoying the meal she has helped prepare, is a delight. In Nutmeg we also saw a family sitting down to enjoy a meal together but I think young kids will be better able to relate to Valiant's more realistic looking characters, which might in turn remind them of their own family meal times.

Pancit is a traditional Filipino noodle dish. In my research I discovered many ways to make it--some variations called for wheat noodles, or for shellfish or pork. I decided to stick to the recipe included in the book, with a few modifications. 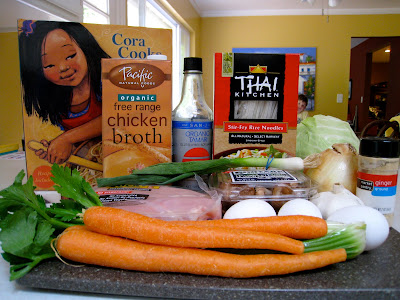 Ingredients:
1. Cook chicken and boil eggs in advance. The recipe in the book actually suggests two methods for chicken cooking--the first involves steamed, boned chicken. I went for the second method, which was cooking the chicken, along with the chicken broth and a teaspoon of soy sauce, in a slow cooker. I cooked on high for three hours, at which point the chicken was cooked through and easy to shred. I love my slow cooker.
2. Soak noodles in warm water for a half hour. While noodles are soaking, chop veggies. If you are using dried mushrooms, soak those in a separate bowl of warm water. Otherwise, slice the fresh mushrooms.
3. Heat shredded chicken, mushrooms, yellow onion and 2 tablespoons of soy sauce in a non-stick skillet (I swirled a bit of olive oil in my iron skillet and cooked them in there). Stir in garlic and ginger, add salt and pepper to taste. Remove from heat and set aside.
4. Heat 1 tablespoon of oil in large, shallow pot. Add other vegetables, sprinkle with salt and pepper. Cook briefly, making sure carrots and cabbage don't overcook. 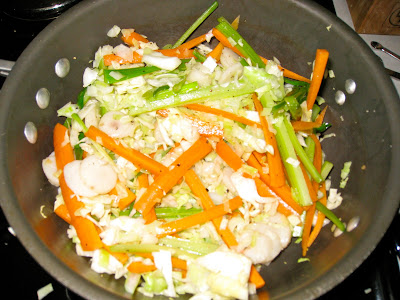 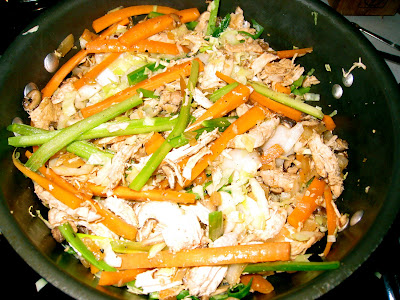 6. Strain noodles. In separate pot, bring 1.5 cups water, 1/4 cup oil, 1/4 cup soy sauce and sprinkle of salt to light boil. Add noodles and stir. Cook 5 minutes. Pour noodles on chicken and veggie mixture. Mix everything together and cook on low for an additional 5 minutes. (Confession: I totally messed up this part. I cooked the noodles according to the package directions and then drained the noodles. So I put the noodles in the pan, then added the water and soy sauce and tossed together.)
7. Serve in bowls. Garnish with sliced egg and green onions. 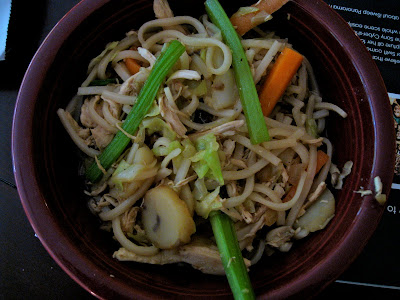 Despite my mishap with the noodles this dish turned out really, really well. Remember a few weeks ago when I said the noodles with browned butter and Parmesan was the best thing we've ever made for this blog? This gives it a run for its money. It had a nice, light flavor and the crisp, fresh veggies really made it a perfect dish to have on a spring evening. My husband thought it was a little bland--that could be because I used a reduced-sodium soy sauce (actually, tamari). One boy loved it and one just thought it was okay but I think he was just being picky. I will definitely make this again.

*Disclosure: Cora Cooks Pancit was provided for review by the publisher, Shen's Books.
Posted by Katie Fries at 12:17 PM

Oh dear, this post has made me hungry and it's still hours till supper!

This looks so awesome, and agree, it's made me hungry, too.